NASHVILLE, Tenn. — A fresh start may be exactly what the doctor ordered for the Vanderbilt Commodores.

After a rough ending to the regular season, Vandy starts postseason play Tuesday with a clean slate at the SEC Tournament in Hoover, Alabama.

“Once we start to get on the road and this bus and go down to Hoover, I feel like that’s always been kind of medicine for us, good medicine for us in so many different ways. Not to say we’ve always played well in Hoover, but we’ve played well in Hoover ever since I’ve been here,” Vanderbilt head coach Tim Corbin said Monday. “There’s been years where we came home after one (game), but the reality is if you look at the resume of work and the body of work … it’s been consistent. I’m not going to tell you we’ve been on the high side, I’m not going to tell you we’ve been on the low side. They’re losses or wins, and you just move forward.”

Vanderbilt ended its campaign with three losses to visiting LSU at Hawkins Field and was outscored 42-15 in the three-game series. The defeats knocked the Dores down to the No. 8 seed this week and into a matchup with Ole Miss (32-21) in a single-elimination game at 4:30 p.m. Tuesday.

Vandy was last an eight seed in 2009. It made a run to that year’s tournament championship game, where it lost to LSU.

“Whether we beat Arkansas or we lost to LSU, my messaging to them doesn’t change from year to year. The context may be a little bit different, but in terms of how we proceed after a weekend series, it’s just ‘go forward.’ That’s really all you can do,” Corbin said. “In this particular situation, the regular season is behind us. We’ve entered this tournament off being swept before and ended up being in the final game. It’s just part of the league that you’re in. Once you strap it on at the beginning of the year, you understand that that’s a possibility. We just move forward.”

The Commodores, despite the weekend’s results, have one of the best pitching staffs in the nation in a handful of categories (ERA, hits allowed per nine innings, shutouts and WHIP, to name a few). Offensively, the numbers tell a different story, with Vandy in the bottom half of the league in home runs, runs, scoring and slugging percentage.

There are also now just three regulars in the lineup hitting .300 or better.

But none of those numbers, good or not so good, really matter anymore as Vanderbilt looks to win its third SEC Tournament championship. It will have to win a lot of games this week to do that.

“They’re a tough bunch. They’ve been bruised, they’ve been banged on a little bit. We’ve just had some tough baseball games here the last five weeks,” Corbin said. “But they’re fine. They regroup pretty quick—quicker than the coach.”

The winner of Tuesday’s game advances to face top-seeded Tennessee (49-7) at 4:30 p.m. Wednesday. 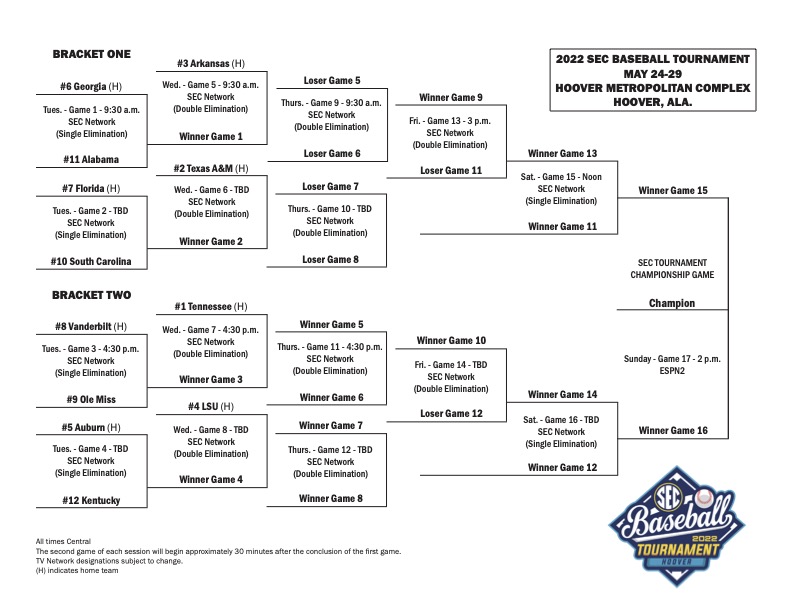