NASHVILLE, Tenn. — Last September, two weeks before the start of a 2020 season reshaped by the pandemic, Vanderbilt’s soccer coach Darren Ambrose and his assistant coaches still weren’t sure which of their largely untested goalkeepers would start the opening game against Kentucky. First-year student-athlete Kate Devine was hoping she had shown enough in preseason to earn those minutes. Then the email arrived: She had tested positive for COVID-19.

Devine fretted that the quarantine timeline would prevent her from playing in the opener, but when subsequent tests revealed myocarditis—inflammation of the muscle of the heart often caused by viral infections such as the SARS-CoV-2 virus—she had more to worry about than just one game. Her entire season, and even her long-term health, suddenly were in doubt. 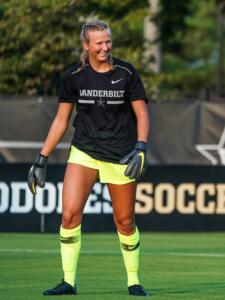 Two paths diverged in those moments—one the team’s, the other Devine’s—and they only fully came together again in May, when after a difficult recovery she finally earned her long-awaited first start for the Commodores in a season-ending loss against Penn State in the second round of the NCAA Tournament. Fellow goalkeeper Sarah Fuller, BA’21, had helped define Vanderbilt soccer in 2020 after earning the starting role and leading the Commodores to their first SEC Tournament title since 1994, but by fighting her way back into the lineup, Devine showed that she was prepared to leave her own mark on the program, too. As the team searches for a new identity this fall, Devine intends to embrace this season like no other.

“I can’t really forget about it because it’s always going to be in the back of my head,” she said of her experiences last academic year. “People always ask me to explain what happened and why I was out. It’s never going to go away, so I might as well use it to learn new lessons. It’s been hard to even be able to say I’m thankful for what happened—because who knows what else could have happened. But I really did learn a lot from being out.”

A goalkeeper made in Nashville

Devine initially preferred scoring goals to preventing them. She didn’t make the transition to goalkeeping until fifth grade, when her family moved to the Nashville area from Kentucky and the local club team needed someone between the sticks. Tall and athletic, the daughter of two former basketball players, she had the athletic profile to thrive in the role.

The only student-athlete from Tennessee on the current Commodores roster, Devine first attended Ambrose’s camps when she was still in middle school. For a coach still new at Vanderbilt, she was in some ways one of his earliest recruits. With each passing summer, Devine looked less like any other camper and more like someone who could help Ambrose build something.

“Every time, you noticed a change,” Ambrose said. “You noticed growth in her confidence and her communication level. Everything was going in the right direction, and you just enjoyed being around her when you saw her.”

That joyousness may be her most distinctive trait, even more than the abundant athleticism and the comfort with the ball at her feet—a necessity in the modern game and a remnant of her time spent chasing goals. At a position that can be isolating, where you quickly run out of fingers counting the great goalkeepers who walled themselves off behind eccentricity or abrasiveness, Devine radiates enough positive energy to power a small city.

Former Vanderbilt head coach Ronnie Woodard coached Devine in club soccer throughout the goalkeeper’s high school years. Such is her affection for the goalkeeper that Devine was the only player the coach ever asked to babysit her son. But she also had to remind the player on occasion to mix in some fierceness with the goofiness when she stepped on the field.

“She’s a different kind of goalkeeper because she brings laughter and smiles to a team,” Woodard said. “Some goalkeepers take that pressure, and it turns into their personality. They get a little too focused and a little too disconnected from the fun of the game because of the pressure that’s involved. Kate doesn’t.”

By the time she made the short trip to campus for preseason last summer, Devine felt ready to compete for playing time. The pandemic disrupted her senior year of high school the same way it did for students across the country—she never participated in a graduation ceremony. Still, she found silver linings in the early days of the pandemic. With little to do but go for runs, she was in the best shape of her life. And the extra time at home with her family provided peace of mind before embarking on a new chapter.

“She was really fit, she blew away the beep test and the goalkeeper fitness test we do,” Ambrose recalled. “In training, she was competing comfortably. We really thought she had the qualities athletically to compete right out of the gate.”

COVID-19 brought that steady progression to a screeching halt. She didn’t feel any symptoms before she tested positive, nor did she feel any while isolated during quarantine. Her mom, a physical therapist at Vanderbilt University Medical Center whose patients included some dealing with the lingering effects of the virus, couldn’t help but wonder if it had been a false positive.

When Devine, shortly after coming out of quarantine, received a message from athletic trainer Sara Melby asking her to come for a meeting, the goalkeeper assumed it was about merely checking off the final few boxes of the return-to-play protocol. She assumed she would soon be back on the field competing for starts. Instead, Melby explained that the cardiac MRI all student-athletes were required to undergo before resuming physical activity had revealed myocarditis.

That was one of only two times during the 2020 season that Devine recalled crying.

Doctors advised three-to-six months of extended rest, during which her heart rate wasn’t supposed to rise above 110 beats per minute. That’s roughly equivalent to the result of a 10-to-15-minute walk at a reasonable pace. The edict meant she couldn’t even be an ancillary participant during practice—delivering crosses for the other keepers, for instance—in the way that injured student-athletes often stay connected to a familiar routine. She could only stand to the side and watch.

In nearly three decades of coaching, Woodard hasn’t come across many people more persistently positive than Devine. Which made it even more difficult to recognize the forlorn figure who trudged across a soccer field in January to pay her former club coach a surprise visit.

“I have not seen a sadder Kate Devine ever,” Woodard recalled. “She is not a sad soul, but she was struggling.”

That meeting, Devine recalled, was the second time she cried. She wasn’t sure why emotions overwhelmed her that particular day. It may have just been the cumulative toll of the experience catching up with her. Waking up in the middle of the night with chest pain, needing to take a break while walking up a hill or to sit down between flights of stairs, and knowing she had to report the issues but worrying they might delay her return—all of it weighed heavily on her. As did the toll of going without soccer. 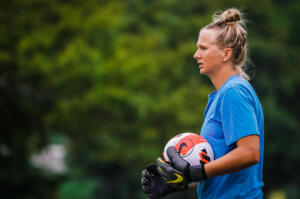 Behind the jokes and smiles, Devine is a self-professed perfectionist. She holds herself to an exacting standard and is hard on herself when she falls short. That’s precisely why it’s important to her to be so positive and bring such joy to the field. She can lift those who might be struggling, while at the same time taking her mind off her own self-criticism. Not having the outlet of competition disrupted that.

“I don’t think I knew how to deal with it emotionally just because I had never dealt with anything like that before,” Devine said. “I just kind of shut myself off. I tried to be happy at practice around everyone, but it was hard to do that most days. I think the coaches and the team understood that. I tried to act happier than I was, but it was hard most days.”

Woodard encouraged her to take advantage of the vast resources available to her at Vanderbilt. Ambrose and the staff, too, saw her retreat and kept a close eye on her—giving her the space she needed while making sure she knew there were a lot of people in her corner.

But mostly it just took time and patience—and a gradual return to soccer—to help her heal.

Lessons from the pandemic

The medical staff monitored Devine’s heart closely for more than a month once she was cleared to resume light physical activity prior to the spring portion of the past season. Her mother, Ginny Devine, credited VUMC cardiologist Dr. Frank A. Fish with regular communication and feedback that put their minds at ease. The old Kate didn’t return overnight, her mother noted, but the progress paralleled her return on the field in the early months of this year.

“Just passing a ball, being able to run around was the best thing ever,” Kate said.

At first, she played hesitantly, not throwing herself into dives. It wasn’t conscious fear but more rust and a lack of rhythm. A discussion with assistant coach Kelly Keelan, in which she gently but firmly reminded Devine that she wasn’t playing like herself, helped relight the fire. By the end of March, Ambrose said there were days when Devine was the best player on the practice field.

She made her first collegiate appearance in the second half of a game at nationally ranked Duke on April 11. She was so excited to be back on the field, and so out of the normal rhythms of the sport, that she took off her gloves in satisfaction with a job well done at the end of regulation—forgetting overtime awaited. But her save in the waning seconds of that overtime ensured the Commodores came away with an impressive road draw. 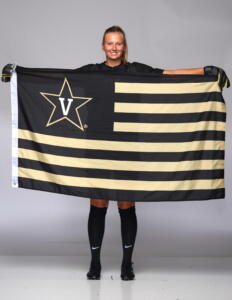 As Vanderbilt prepared for its second-round game in the NCAA tournament, more than 200 days after its season opener, Ambrose made the difficult decision to start Devine ahead of Fuller, the senior who had become one of the most recognizable athletes in the country.

“It was one of those situations where you cannot ignore Kate because she has been so good,” Ambrose said. “We always say the best players play in this program, regardless of age. If all we ever did was pick based on age and experience alone, then we’re not doing right by the kids that are working hard every day and being successful. And Kate did it.”

There will be competition for playing time again this season. Ambrose again finds himself with more quality options in goal than can play at one time. Whether she emerges as the starter from the outset or at some point during the season, Devine will have to earn it all over again.

There is nothing she would rather do.

Ginny said her daughter hasn’t been ready for any soul-searching conversations about what she went through while she waited for her heart to heal. Those conversations may come with time. But much of it required no words. A mother could see what was missing.

“She was definitely sad,” Ginny said, her voice suddenly choked with emotion. “One thing that I took away as a life lesson is that you can never judge someone for how they react to the loss of something that is very important to them.

“You can never be a judge of how someone should measure their lives.”

At first glance, someone might look at an Instagram post from earlier this month on the soccer team’s official account and wonder how seriously Devine takes her craft as she trades dance moves with teammate Abi Brighton on the field. But it is best not to judge. Not without knowing a little more about Vanderbilt’s goofy goalkeeper.

There is joy there. Hard-won joy.

For Darren Ambrose, building a premier soccer program starts with a passion for the game