NASHVILLE, Tenn. — Jerry Stackhouse knows his mission is clear. And as tough as it appears on the surface, the first-year Vanderbilt head coach is looking forward to tackling the challenge of the next three months.

“Now we’ll look through our personnel again and see where our main strengths are and try to build some offensive rhythm with the guys and their strengths – maybe a little more slicing to the basket and things like that as opposed to being a perimeter-dominated team.” 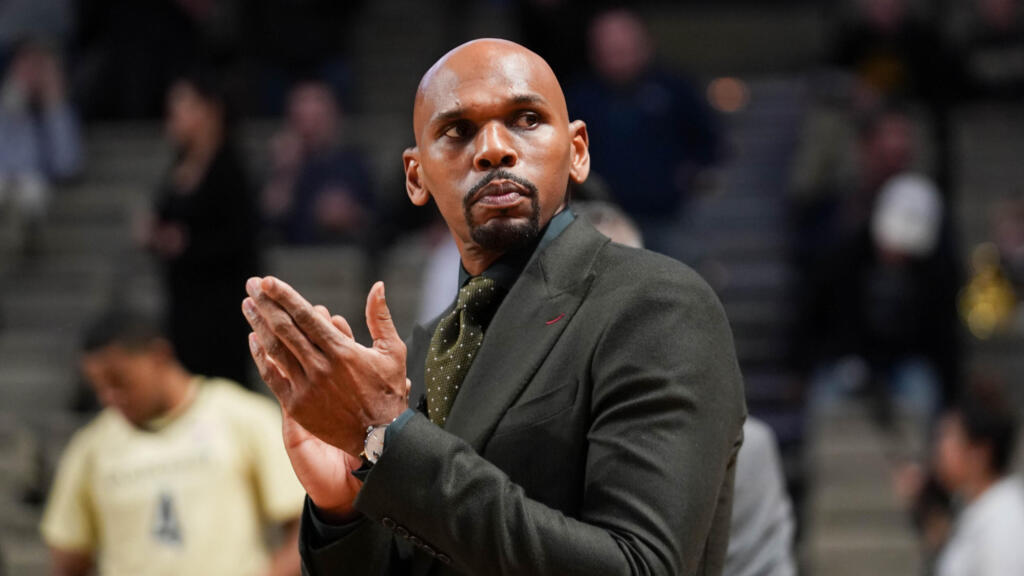 Stackhouse and the Commodores (8-7, 0-2 SEC) played their first game Saturday without leading scorer Aaron Nesmith. The sophomore suffered a foot injury Jan. 8 at Auburn and Stackhouse estimates his shooting guard will be out at least six weeks.

Vandy didn’t respond well to Nesmith’s absence Saturday, losing 67-50 to visiting Texas A&M. The letdown was expected for a team trying to figure out what to do without its leader on the floor with them.

“It was just a perfect storm for us,” Stackhouse said. Saturday. “Not what we wanted to see from a team that was trying to find some continuity with some lineups and some different things that we had to use before.

“We lost a guy that averages probably 36 minutes a game. It’s just an adjustment for everybody. And then with a team like (Texas A&M) that wasn’t really aggressive, I just thought we were passive. We were passive and our mindset was passive. It was deja vu again. When they hear Aaron’s (season is) over (Friday) you could almost just see it come over the team like, ‘Here we go again.’ It’s more mental right now.”

Vanderbilt also lost guard Darius Garland – the eventual No. 5 NBA Draft pick now playing as a rookie in Cleveland – in the fifth game of the 2018-19 season due to injury. The Dores finished 9-23 and winless in the SEC as it struggled to figure out ways to win without Garland.

Nesmith, also projected to be an NBA Draft selection later this year, is fifth in Division I basketball by scoring 23 points per game. He leads the country with 4.29 made 3s per game and in 3-point shooting (52.2 percent).

But Vandy won’t be able to rely on those numbers moving forward.

“Feel so bad for that kid. He was emotional. He was in tears,” Stackhouse said of Nesmith. “Historic year – what he’s done and how he’s put himself where his draft stock is in a good spot. (The injury) is something that will be correctable and then he’ll get back 100 percent for himself.”

Vanderbilt has another big week coming up with a trip to Arkansas (13-2, 2-1 SEC) at 7:30 p.m. Wednesday and a home game with rival Tennessee (10-5, 2-1 SEC) at 5 p.m. Saturday. Before those games Stackhouse and the Dores must formulate a new game plan and maybe even a new identity.

Junior guard Saben Lee (15.7 ppg, 5.1 apg) will be more of a focal point offensively and freshman Scotty Pippen (10.7 ppg, 4.5 apg) will have to raise his level of play on both ends of the floor.

In the front court, where Vandy is already without senior Clevon Brown due to a knee injury, redshirt-sophomore Ejike Obinna and freshman Oton Jankovic will continue to see increased playing time.

“It’s a big adjustment for all of us,” junior guard Maxwell Evans said. “I feel like we all have to do a little bit more. (Nesmith) was our best player and leader on the court, so just to fill in his spot we’ll have to talk a little bit more and make plays for each other.”

The immediacy and surprise of Nesmith’s injury over the weekend shook Stackhouse’s team to its core. Now that reality has set in to start the week, there’s no other option than to move forward.

“That’s kind of where their mind is right now. And they’re 18, 19, 20-yard old kids,” he said. “They’re not grown men, hardened men who have been traded two or three times and you just tell them, ‘C’mon man, pick yourself up,’ and next man up. It’s not as easy as that. The next man up is not quite as good as the man who just left.

“But we’ll find a way to compete.”

Commodore Nation, Thanks for showing up in a Big Way for the boys yesterday! We’ll be better! #EmbraceAdversity #AnchorDown ⚓️⬇️