The Commodores will start their quest for the 2019 NCAA Women’s Golf Championships at the Auburn Regional. The 54-hole regional is scheduled May 6-8 at Saugahatchee Country Club in nearby Opelika, Alabama.

The Commodores will look to advance to the NCAA Championships by finishing among the top six teams in Auburn. The national championships will be held May 17-22 at Blessings Golf Club in Fayetteville, Arkansas.

Vanderbilt will be the No. 2 seed at the 18-team Auburn Regional. They are currently ranked No. 4 nationally by Golfstat and No. 7 by Golfweek.

The Auburn Regional invitation marks Vanderbilt’s 20th all-time appearance in NCAA regionals. The Commodores have participated in 18 of the last 19 NCAA tournaments.

The Commodores also have qualified for NCAA postseason play in 11 of 12 years during Greg Allen’s tenure on West End.

“We are really excited to be going to Auburn next week. The girls have worked hard and have played at a high level all year,” Allen said. “We all were not satisfied with how things ended at SECs last week so we’re anxious to get back out there and play again.

“The thing about a NCAA Regional is that anything can happen. I believe in this team and our ability to battle until the very end. SEC’s, as well as last year’s regional, were incredible growing opportunities for our girls. Bottom line is we need to be ready to play from the very start and give our best effort for 54 holes. We are looking forward to the challenge of advancing to Nationals in Fayetteville,” Allen added. 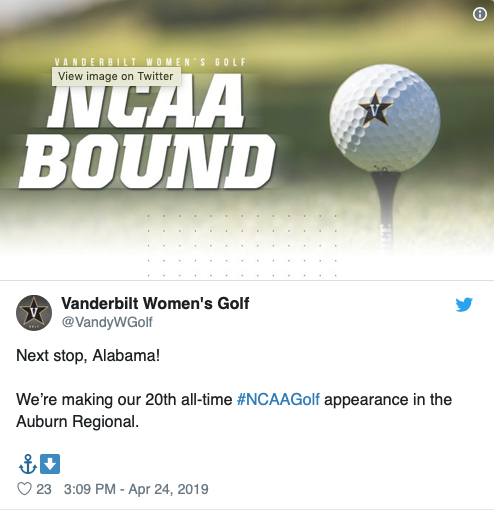 In Vanderbilt’s 19 previous NCAA regional appearances, they have advanced to nine NCAA Championships, most recently in 2013. The Commodores’ best finish at the national championships is a fifth-place result in 2004.

The Commodores have captured two previous NCAA regional team titles, winning the 2014 East Regional in Tallahassee, and the 2004 Central Regional in Normal, Ill.