NASHVILLE, Tenn. — Often during last Friday’s practice, Vanderbilt’s eighth of the spring, first-year head coach Clark Lea had to take a moment for a little one-on-one with a young Commodore: his son Clark Lea III. 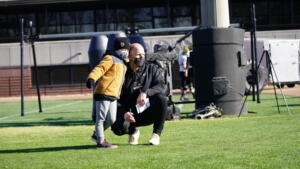 It’s not unusual to see a child or two on the sidelines during Vandy training sessions. Family involvement, Lea said, is part of the off-field education for his team.

“It’s not only important for us and our roles as parents, it’s also important for our team to see that, too. I think the players appreciate that,” Lea said. “It humanizes us. We can get feeling some kind of way about how important we are at times. Then to have to our families around puts us in our place.

“It’s a special part of the relationship we want to make sure we’re fostering here. We have a lot of young families on our staff, which will bring a lot of energy to the operation.”

Now having completed nine practices, Vanderbilt will be back on the field Thursday morning before holding a scrimmage Saturday at Vanderbilt Stadium. That location is where the Commodores ended Tuesday’s session.

Lea moved his team from the practice field behind the McGugin Center and into the venue to simulate overtime scenarios. The former Notre Dame defensive coordinator also said his offensive staff has installed red zone packages, short-yardage third down plays and goal-line calls in recent days. Thursday’s practice will include work on two-minute drills as well.

But whether or not the Dores are fully grasping and crisply executing on the field all that they are tasked with so far isn’t as important to Lea as what he sees from the mindset department.

“I think the starting point for us as coaches is figuring out what our identity is going to be, what our strengths are. That takes time,” Lea said. “We’re forming a team through practice, through adversity. That takes times. It’s less about scheme and more about the attitude, the energy and the enthusiasm.

“Ultimately for us, this spring will be the most truncated (playbook) install that we’ll have. It needs to be a foundation that we can build on through the summer and into the fall.”

The Commodores are a little more than a week away from showcasing all they have learned during the annual spring game April 17. The stretch leading up to that is typically a tough one. Lea has seen his players remain relatively mentally sharp thus far.

Now, it’s about reaching deep to finish on a positive note physically.

“It’s just physically handling the volume. That’s a conditioning thing where we’ll train to move the needle that way through the summer,” Lea said. “This winter was more about just establishing foundational principles, how we start, how we’re attentive to details throughout the middle and how we finish.

“That didn’t allow us to push the volume a lot during the winter. We’re doing that now and the team will come out on the back end of this a little more equipped to handle sustained effort over time.”