An Historic Moment in Missouri

Sarah Fuller, a Vanderbilt senior from Wylie, Texas, took the field for the start of the third quarter during the Commodores’ game at Missouri. She lined up with the Vandy kickoff team, eyed the ball and lined a 30-yard line drive down the field to the Missouri 35-yard line.

With that swift kick of her right leg, Fuller became the first woman to ever play in a football game in the Southeastern Conference and for a Power 5 Conference program. Her name is now carved in stone in American sports history. 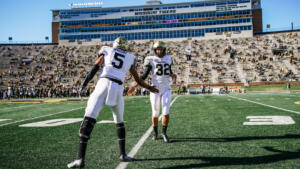 “I honestly haven’t taken a second to soak it all in, really. I just think it’s incredible that I am able to do this,” Fuller said afterward. “All I want to is be a good influence to the young girls out there because there were times that I struggled in sports but I am so thankful I stuck with it. It’s giving me so many opportunities and I’ve met so many amazing people through sports.

“I just want to say, literally, you can do anything you set your mind to – that’s the No. 1 thing.”

After winning an SEC Tournament soccer championship for the Commodores less than a week ago, Fuller, a goalkeeper, got a phone call asking if she’d be interested in joining the Vandy football program. Less than an hour later she was strapping on football pads.

What followed was a wild week of waiting to be cleared for competition while remaining silent despite dozens of interview requests from news and sports media outlets from around the country.

On Friday, Fuller announced herself that she was available to help the Commodores in Columbia, Missouri, any way that she could. She had to mute her social media channels as she went from a little more than 200 followers on Twitter on Friday to more than 28,000 and counting today.

An Instragam post on Friday by Fuller now has more than 234,000 likes. 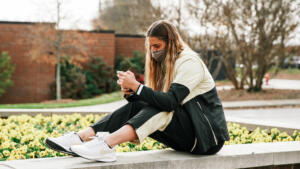 “When I’m in the moment and in person and doing all this stuff, it feels normal and it feels right,” Fuller said. “The social media aspect has just gone way more than I ever thought. It’s insane.

“But that doesn’t need to be the focus point. I want to do well for this team and all that I can.”

Fuller’s only opportunity on the field came during that third-quarter kickoff. The Vanderbilt offense never scored to allow her a chance at an extra point and it never crossed inside the Missouri 33 to set up a potential field goal try.

Meanwhile, Fuller paced the sideline with helmet on awaiting her shot. When the Commodores (0-8, 0-8 SEC) went into the halftime locker room down 21-0 she stepped up and demanded more from her new teammates.

“She basically just gave us a pep talk and said, ‘Hey guys, we got to come on. Your teammates are out there fighting on the field,’ ” Vanderbilt freshman quarterback Mike Wright said. “There was a situation where we had a first down and Sarah was the only one yelling on the sideline.

“She mentioned when she was winning a (soccer) championship it wasn’t because of the girls on the field, it was everybody. Everybody had the same mindset. Everybody was screaming, everybody was cheering for each other. You can go back and look. The sidelines were electric the entire game after that despite the outcome.” 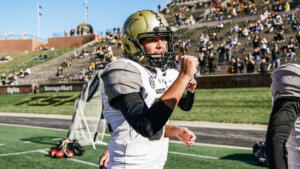 The mindset and mentality of Fuller is not surprising to those who know her well, but Wright and Vanderbilt head coach Derek Mason were quick to point out it would have been easy for her to pass on such a bold task this week.

As the days counted down toward Saturday’s kickoff, pressure and attention mounted. Detractors claimed her participation was nothing more than a publicity stunt. Fuller and her family were hounded by media wanting confirmation that she had indeed joined the team.

All along Fuller, who wore No. 32 on Saturday, kept her head down and went about her business knowing she needed to come through for her school and her teammates.

“She wasn’t trying to set some landmark event. She was just trying to help really where she could,” Mason said. “There’s just a lot to be said about Sarah and her unselfishness and her ability to say, ‘OK, if called upon, if needed, I’m a Commodore and anything that I can do to help this team I’ll do it.’ She did it with a smile on her face all week.

“For her, I just think the world of her. Her ability to just be in the moment and not really be scared of the moment or afraid of the moment but just looking to dominate the moment is what she did. Hat’s off to her.”

Fuller has no plans to make Saturday’s moment a one-off. She hopes she’ll continue to be part of the team moving forward and even got vocally emphatic about wanting to improve her kicking and technique.

The Commodores now turn their attention to a road game at Georgia next Saturday. Fuller, of course, has everyone else’s attention for now and always.

“I’ve always said something in my program – people are limitless. Not limited,” Mason said. “Today Sarah Fuller was just able to show that this game is not limited to one sex. What it comes down is if needed, if necessary, if you have a skill set, you can do anything that you want to do. Today she was needed, she was necessary and she did the job.”

HERstory by Vanderbilt Athletics on Exposure