Early in his Vanderbilt career, coaches tried the Matthews at safety and receiver. Once all parties settled on tight end, Matthews put together one of the finest receiving campaigns ever, helping spark the team’s run to the Hall of Fame Bowl.

In 1982, Matthews was named First Team All-America by Football News after posting 61 receptions for 797 yards and 14 TDs, most ever by a Commodore. Later that season, Matthews was also named SEC Offensive Lineman of the Year by the Atlanta Touchdown Club. 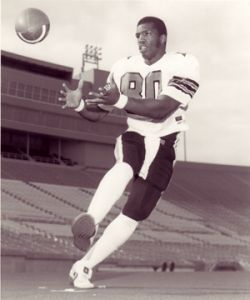 He concluded his Commodore career with 114 catches and 18 touchdowns.

Matthews ranks among the all-time Commodore receivers in several categories.

Matthews was drafted and played three seasons with the Atlanta Falcons.