A Fine Weekend in Augusta

AUGUSTA, Ga. — A memorable week in Augusta, Georgia, concluded Sunday for two of Vanderbilt’s own.

John Augenstein and Brandt Snedeker wrapped up play at the Masters with their final 18 holes at the Augusta National Golf Club. Augenstein, a fifth-year senior on the current Vandy team, finished tied for 55th and was 3-over for the tournament. Snedeker, 39, was 7-over and came in 59th.

Both players began tournament play Thursday and Augenstein impressed in his debut. The 23-year-old finished 3-under and scored an eagle on the par-5 fifth.

After shooting an even round for his second 18, Augenstein made the cut to be able to play into the weekend. His 3-over 75 on Saturday was followed by a final-round 75 on Sunday.

Augenstein will return to West End to rejoin the Commodores who are looking forward to competing in the spring of 2021.

“Fine showing for the @VanderbiltU man.” 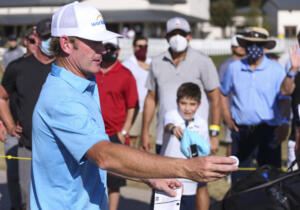 Snedeker was steady over the first two rounds by shooting a 71 on his first 18 and second 18. But the third round saw Snedeker finish with an 7-over 79 before he settled with a 74 on Sunday.

The Nashville native wound up 7-over for the tournament.